On Thursday 27th of January, Eastbrook participated in its first debating competition of the year. The competition saw our year 7, 8 and 9 Debate Mate club members face students from several other East London schools as part of the Urban Debate League.

For many of our students this was their first ever competition, and we are so impressed with the effort that they put in to their debates! Although only 12 students were able to participate in the debates themselves, almost everybody in the club turned up to support their peers and worked hard to come up with challenging questions to pose to the opposing teams during the debates. As such, Judges were quick to commend the team spirit and supportiveness of our pupils.

Eastbrook students also received praise on their growing confidence, articulation and fantastic sportsmanship. Despite loosing the four debates, we would like to congratulate our fantastic debate teams, who walked away from this round of the competition with their heads held high. As the school year has progressed, our Debate Mate students have improved so much and we look forward to seeing them go from strength to strength as we enter the next round of the competition in February. 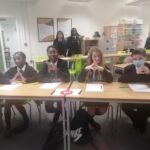 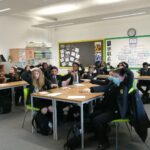