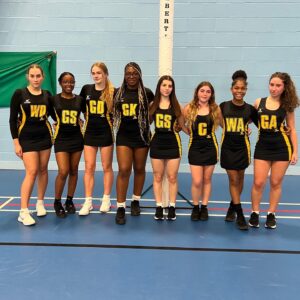 Fixture time came round again for the U16A team on Monday 21st of November. This time they faced Robert Clack and they secured a 19-10 win.

The team went into game knowing it was going to be a tough game and would have required for them all to be playing as a team and playing at their best and they did not disappoint. The first quarter ended with Robert Clack leading 3-1, but we knew the game was far from over and the team could make a comeback. The second quarter came and the girls fought back taking the score line to 5-4 to Eastbrook.

Taking the lead at the end of the second quarter, gave the girls the momentum they needed. They kept pushing for the rest of the game. They didn’t let injuries during the game have a negative impact, even with some of the girls playing out of their normal position, they continued to fight to secure the win.

The third quarter ended with a 11-8 lead to Eastbrook, but the team knew a 3 goal lead in netball doesn’t guarantee a win with 10 minutes left to play. The intensity and skill level the girls demonstrated showed Miss Harper just how much they are improving and the desire to secure another win kept them going. The final quarter came and the team dominated only allowing Robert Clack to score 2 more goals whilst Tamara did not stop scoring making the final score 19-10 to Eastbrook.

Players Player of the Match as voted by Robert Clack – Lilly

Well Done – We are PROUD of you all!